Graham Denman has been a long-time member of South West Hertfordshire Conservatives and has previously held the post of Deputy Chairman Political for 4 years between 2003 and 2007. He was then Association Chairman between 2007 and 2011 and has also been a District Councillor representing part of South Oxhey. Graham has once again been elected as Deputy Chairman Political and is looking forward to giving every possible support to our County and District Council candidates seeking election in 2021. 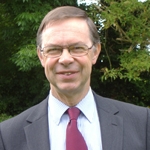